This documentation covers a variety of generic help topics while referring to the previous generation of the Phorcides software found here.

The next generation of the Phorcides Client software is documented here.

An effort was then taken to treat completely off of the measured anterior corneal astigmatism, the topography-modified refraction or TMR.  Developed by Dr. John Kanellopoulos, this brilliant insight led surgeons to realize the importance of correcting the complete anterior corneal measured astigmatism if you are to correct the anterior corneal topographic irregularities as well.  The results of TMR were better than treating off of the manifest when using Contoura.  However, there were cases in which treating the full TMR led to the astigmatic axis being flipped after surgery.  In other cases, residual astigmatism remained that kept patients from their best vision.

Seeing the results of TMR, some surgeons began to treat 50% of the difference between the manifest and the measured astigmatism.  This technique was appealing in its simplicity and being conservative it would not result in a flipped axis in most cases.  However, this technique is at its heart a “guess” at what the best astigmatic axis and magnitude should be.  It was felt that there was a better answer out there, one that was based on logic, mathematics, and optical physics.  It was this objective that led to the birth of the Phorcides software.

Over the past year thousands of Contoura cases were examined using a new type of software known as GIS, or geographic imaging software.  By applying GIS to the topographic treatment map of an eye and then adding in the optical physics of lens theory, the refractive effect of treating a topographic irregularity was finally determined with accuracy.

Based on physics and mathematics, this effect was found to be accurate and reproduceable. Once this was discovered, the optical vector for any topographic feature could be determined. Using vector analysis this could be combined with vectors for anterior astigmatism, posterior corneal astigmatism, and any internal astigmatism. Combining all vectors and performing additional advanced analysis leads to a much more accurate prediction for what astigmatic magnitude and axis should be treated. No more guessing, no more hunches, just fast reliable accurate predictions.

While Contoura surgeons have found the choice of astigmatic treatment to be the most vexing problem, it is also critical to determine the correct spherical correction. Phorcides builds upon the method I developed known as TCN. TCN stands for the 3 modifying factors that need to be considered to find the correct spherical treatment. T is the topographic effect on the sphere. If you look at the purely topographic treatment map for an eye there is often more tissue that will be ablated in the periphery of the cornea than in the center. This is seen under the topographic map and listed as “Max” and “Cen” for center. 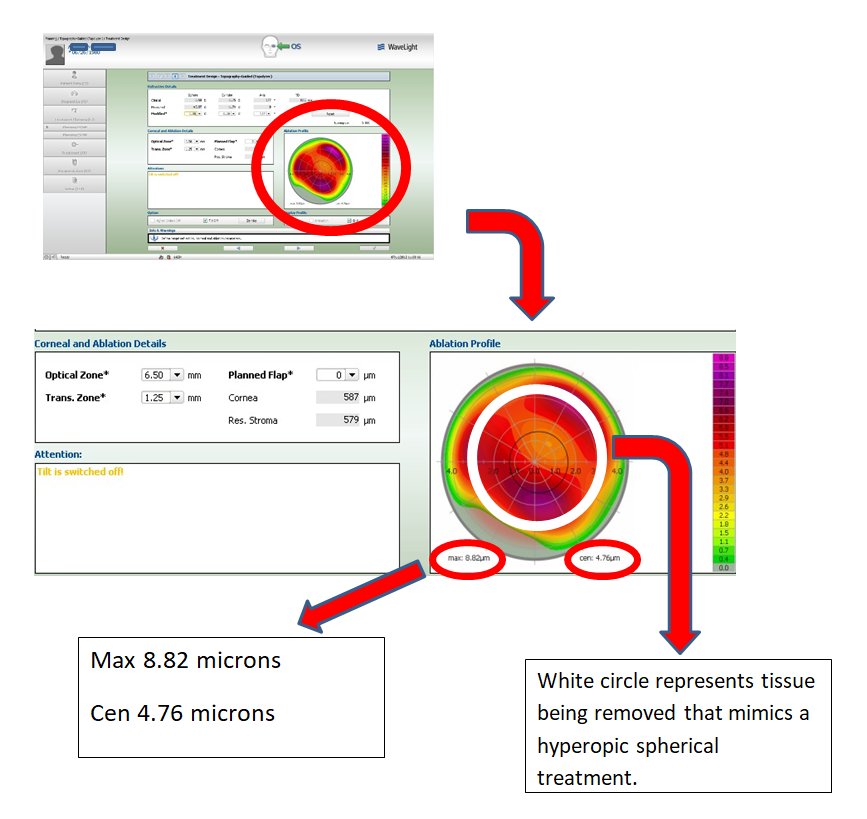 Since this peripheral tissue removal creates an effect similar to a hyperopic spherical treatment, its effect on the sphere must be considered. Next, there is often a difference between the magnitude of the patient’s manifest astigmatism and the magnitude of the astigmatism that will be treated. One must take ½ this difference and add it back to the sphere to maintain the patient’s spherical equivalency.

Finally, both WFO and Contoura treat the sphere the same way with the same laser pattern. Thus, the nomogram developed for WFO applies equally to the Contoura treatment. A nomogram has been developed based off of 4,000 WFO treated eyes.

Phorcides takes all three factors, T=topography, C=cylinder change, and N=nomogram and determines the correct spherical treatment. No other outside nomograms are needed. Over time Phorcides will collect results from each surgeon and create a personalized nomogram for each individual surgeon further improving the accuracy.

It becomes cumbersome to constantly refer to “topographic irregularities”. To simplify this a term has been borrowed from Geology. A collection of material that forms a small curved slope on top of a larger slope of a hill or mountain is called a “talus”. We will use the term “talus” to refer to any raised topographic areas on the topography-treatment maps that we want to identify.